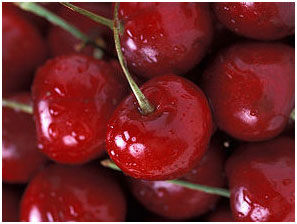 Sour cherries could help athletes reduce muscle damage to recover faster from a tough workout, according to new research published in the American College of Sports Medicine’s journal Medicine & Science in Sports & Exercise.

Researchers at the Sports and Exercise Science Research Center at London South Bank University, in the UK, gave 10 trained athletes 1 ounce of a proprietary cherry juice concentrate, CherryActive (made from sour Montmorency cherries) twice daily for seven days prior to and two days after an intense round of strength training. The athletes’ recovery after the cherry juice concentrate was significantly faster compared to when they drank a control, non-cherry juice.

After drinking cherry juice, athletes returned to 90 percent of normal muscle force at 24 hours, compared to only 85 percent of normal at the same time point without cherry juice – a significant difference that could affect an athlete’s next bout of performance. Researchers suggest that the powerful antioxidant compounds in cherry juice likely decreased oxidative damage to the athletes’ muscles – the damage that normally occurs when muscles are worked to their max – allowing the muscles to recover more quickly.

This is the latest in a growing body of science linking cherries to muscle recovery. Researchers attribute the benefits to anti-inflammatory, antioxidant compounds in the red fruit called anthocyanins, also responsible for cherries’ bright red color.

“Cherries are what I call an ultimate super food,” said Dr. Wendy Bazilian. “Not only are they a perfect complement to a training routine since they’re available year-round in dried, frozen and juice forms, but they taste great.”

The Cherry Growers Association of South Australia welcomes you to their website. We are proud of the fine fruit we produce in South Australia every summer. So proud, in fact, that we have decided to shout about it from the roof tops.

There are no upcoming events at this time.

Parcel of Salmon Steamed with Cherries and Almonds